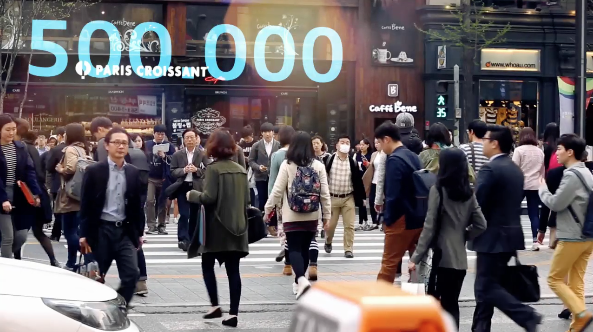 Sometimes when you take on jobs you have a lot of notice and you are able to prepare what you need well ahead of time, and sometimes you will end up with opportunities that arise at the last minute and you need to react quickly and be flexible so that they do not pass you by. This time around, it ended up being the latter.

I received a request for stock footage in Seoul and had informed the company that I do not have stock footage that I sell. Instead I suggested that I go out and shoot footage for them. They agreed to go ahead with the project and I was told I had to give the footage within a day.  I was quite concerned with the deadline but reminded myself that this was very possible and that I could make this happen. I packed my 5D Mark 3, a tripod and some other basic necessities, headed to a rental shop to pick up a Canon 70-200mm f2.8 L series lens, had a quick bite to eat and prepared myself for an intense 5 hours of shooting. The majority of the required content was in Gangnam which helped a lot.

I ran around looking for all of the specific things that were needed which included things like views of the city from high up and shots of people using their smartphones. Filming city crowds can be particularly challenging because people tend to notice and stare at the camera which of course leaves you with an unnatural looking shot. The Canon 70-200L series lens really came in handy in this regard as its longer focal length reduced this problem. I also really love the look of the 5D Mark 3 zoomed in with a shallow depth of field. The depth of field was just right in that it wasn’t so blow out that you were not able to recognize the environment that people are in and it wasn’t exaggerated.

I wrapped up the majority of the shoot in the first evening, and then went back out for a few more hours the next day to grab a few more pick up shots of some touch screens and displays around the city.   All in all, I really enjoyed the challenge of time that this project had presented and I was astounded with the amazing editing job that the production house had done. I was truly thankful to be a part of project.